Tertullian and the Alexamenos graffito

Tertullian and the Alexamenos graffito 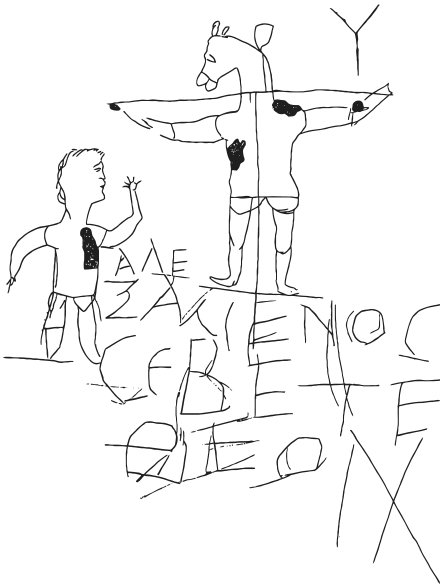 "Alexamenos worships [his] God."
On this forum we have discussed the Alexamenos graffito and some have suggested that it is not certainly referring to Christianity.

However I was reading an article by ILE Ramelli Apuleius and Christianity which mentioned interesting parallels in Tertullian.
Apology

But lately a new edition of our god has been given to the world in that great city: it originated with a certain vile man who was wont to hire himself out to cheat the wild beasts, and who exhibited a picture with this inscription: The God of the Christians, born of an ass. He had the ears of an ass, was hoofed in one foot, carried a book, and wore a toga.

Report has introduced a new calumny respecting our God. Not so long ago, a most abandoned wretch in that city of yours, a man who had deserted indeed his own religion----a Jew, in fact, who had only lost his skin, flayed of course by wild beasts, against which he enters the lists for hire day after day with a sound body, and so in a condition to lose his skin ----carried about in public a caricature of us with this label: Onocoetes. This (figure) had ass's ears, and was dressed in a toga with a book, having a hoof on one of his feet. And the crowd believed this infamous Jew. For what other set of men is the seed-plot of all the calumny against us? Throughout the city, therefore, Onocoetes is all the talk.

The passages from Tertullian confirm that the graffito parodies Christianity.

by Giuseppe
On certain gnostic gems Jaldabaoth is depicted with the head of an ass or pig
https://books.google.it/books?id=Sny7AA ... ss&f=false

by Charles Wilson
Thank you, andrewcriddle --

There are several pointers to Verginius Rufus. "He wore the toga...", emblematic of High Authority in the Roman Hierarchy (Was the toga limited to Senate Membership?). "Having a hoof on one foot" may be an indicator of clumsiness which is literally what did VR in - he dropped a book and, in attempting to pick it up, fell and broke his hip, leading to a painful death that lasted months.

He participated (I believe) in the Empty Tomb Comedy (Pliny the Y and Tacitus), tying him to the creation of the NT, high-tailing it out the back door when the troops wanted to proclaim him emperor at the death of Otho. And so on...

Gumming up the works here is the Head of an Ass Motif. I had often entertained the thought of Galba playing that part. Perhaps Pretenders to the Throne were satirized as Ass-Heads, even if they attained their goal [See Note below].

Alas, I have run up to the limits of what I may perceive.

[Note: V Rufus rejected the calls of many to ascend to the throne, I know. The sentence might be better read, "Perhaps those associated with the possible ascension to the throne were satirized..."]

andrewcriddle wrote: ↑
Mon Jan 20, 2020 10:42 am
However I was reading an article by ILE Ramelli Apuleius and Christianity which mentioned interesting parallels in Tertullian.

There is also the pagan claim in Minucius Felix' Octavius IX,3 against Christians

Nor, concerning these things, would intelligent report speak of things so great and various, and requiring to be prefaced by an apology, unless truth were at the bottom of it. I hear that they adore the head of an ass, that basest of creatures, consecrated by I know not what silly persuasion — a worthy and appropriate religion for such manners.

by Secret Alias
That's very interesting. But I don't think there is an etymological link with ὄνος.

Probably not, but linguistic puns and false etymologies were rampant in antiquity.

ETA: I remember that decades ago a US public figure used the term "niggardly" with reference to a budget or some such; he was castigated by people who thought that this term had something to do with a certain racial slur, those people being apparently unaware that there is no actual etymological connection between the two terms.


But the Jesus of the Sethians, who considered Jesus as Seth the Son of Adam (=Son of Man).

The Pagans didn't understand who was this Seth, therefore their inference was:

Jesus was Seth the Egyptian god with the canine head.

This confusion between the biblical Seth and the Egyptian Seth is the simplest explanation for the "head of an ass" etc.
All times are UTC-08:00
Page 1 of 1
Powered by phpBB® Forum Software © phpBB Limited
https://www.phpbb.com/